In the history of Russian art, it is quite difficult to find a more tragic figure than Alexei Kondratyevich Savrasov. A deep and talented landscape painter, who created several hundred paintings making up the glory of Russian painting, is known to the public as a master who created one picture - "The Rooks Have Come Back". His whole life was a fusion of tragedies in his personal life and brilliant victories in art.
Savrasov's childhood

On May 12, 1830, in the house of the Zamoskvoretsk merchant Savrasov, a boy was born, who was christened in honor of St. Alexy, the Moscow miracle worker. From his early childhood, the son of the merchant Savrasov loved to draw most of all. When the boy was twelve, his drawings were quickly sold out in trading places in Moscow. At first, the father regarded his son's studies as a manifestation of commercial talent and was very pleased. However, when his son announced his intention to enter an art school, the family was categorically against it. It got to the point that Alexey was "deprived of the table" and "kicked out to the attic." The studies had to be stopped under the plausible pretext of "mother's illness." Only the personal intervention of the Moscow police chief and teachers of the Moscow School of Painting and Sculpture, allowed the boy to continue his studies.

In 1848 Savrasov was already noted as the author of the best student sketches. In 1849 Savrasov was sent to Ukraine to paint landscapes. The works brought from this trip drew favorable reviews from critics. In 1850, the commission of the school, having reviewed the work of a student Savrasov "View of the Moscow Kremlin by moonlight" and "A stone in the forest at the Spill"at their meeting, decided to confer the title of artist on the student and complete his studies.

Savrasov's work in the royal family

The royal family became interested in the works of the young artist. The Grand Duchess Maria acquires his painting "The Steppe with the Chumaks in the Evening" and invites Savrasov to work at her country residence. The result of this trip is two unusually successful works: "The seashore in the vicinity of Oranienbaum" and "View in the vicinity of Oranienbaum". These two paintings were the artist's exam works for the title of Academician of the Russian Academy of Arts. Savrasov is 24 years old.

In 1857 Savrasov marries. The next twenty years saw the heyday of the artist's creativity, at the same time a series of family tragedies.

Savrasov works are bought by Tretyakov for his gallery, and they are included in the exposition of Russian pavilions at world exhibitions. The recognition came. Savrasov becomes one of the founders and active participants of the Association of Traveling Exhibitions. In the meantime, the artist is experiencing the death of his two daughters. A discord begins in the family, which in 1876 led to the disintegration of the family.

The sunset of the artist's life

Since the late 70s, Savrasov has gone into his feelings and got addicted to alcohol. The tragedy of the artist affected his work and life. After the death of his friend Vasily Perov, who more than once saved Savrasov from the wrath of his superiors (the artist was a teacher at an art school), the artist is deprived of a place, a state apartment.

The next 15 years of Savrasov's life are comparable to a nightmare, full of scandals, poverty, and rare creative luck.

The artist died in 1897 in a hospital for the poor and was buried at the Vagankovskoye cemetery in Moscow.
Like 1
Dislike 0
Comments (0)
Other
Alexei Savrasov "The Rooks Have Come Back" - Painting Description 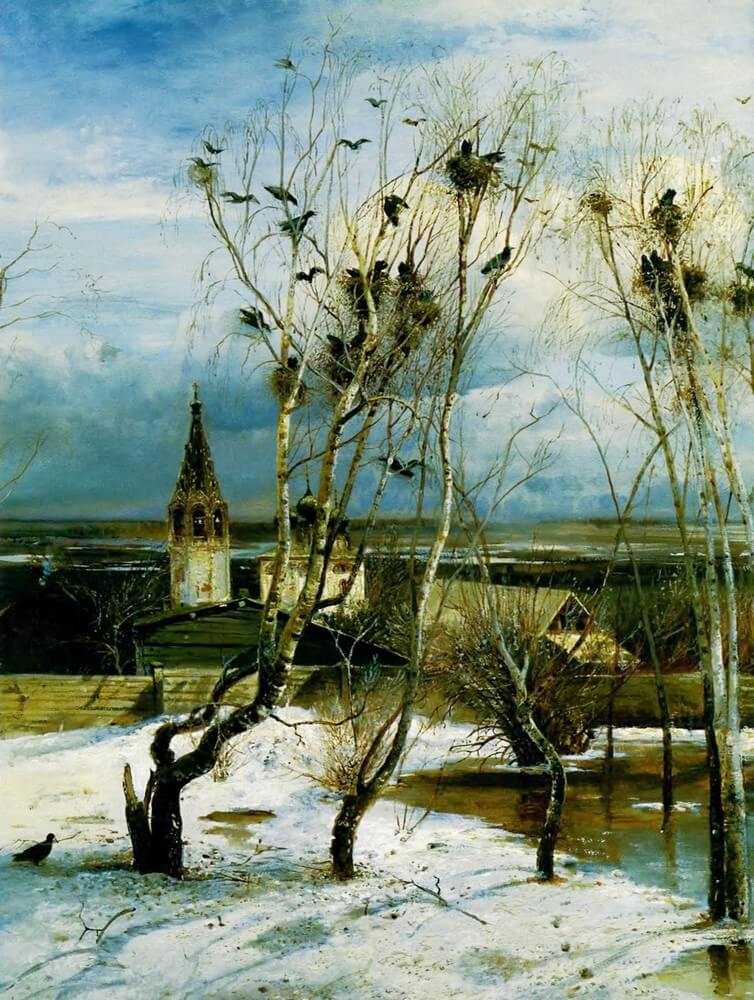