The seal of the "illegitimate" haunted Perov from his birth and until the time when the great artist ceased to be someone's son and became himself - a bright and extraordinary personality. His surname is the result of a "witty" nickname that he received from his first teacher, a sexton-sip, for his graceful handwriting.

A little about parents

The artist's father was Baron Credener, who served as a prosecutor in a distant Siberian province. The emblem of Credeners is filled with royal lilies, unicorns and roses, a testament to its antiquity and nobility. Many brilliant diplomats came from the Credeners who served the Russian Empire in the New and Old Worlds.

The mother, Akulina Ivanova, was a Tobolsk bourgeois woman. We know that it was she who taught the future professor and academician to read. And nothing else is known.

Even though shortly after the birth of Vasily, Baron Credener and Akulina Ivanova got married, the father could not give his surname or title to his firstborn. Vasily was assigned to the Arzamas bourgeoisie with the surname Perov.

Since the birth of Vasily, the Kridener family has been constantly moving somewhere. First, this was associated with his father’s service; then, after the scandal in Arkhangelsk (Baron Credener was an educated and well-mannered man, but very unrestrained in his language), because of satirical verses addressing all the people involved in the provincial administration, the service had to be left. Now the family's wanderings were associated with the search for a new service. Petersburg, Livonian provinces, Samara, Arzamas - everywhere they had to live with numerous relatives, which did not make the atmosphere in the family too happy.

Finally, when the baron lost all faith, he received an offer to enter the service of the manager of a large estate. Seeing his son's hobby for drawing, his father decides to send him to Stupin's private school in Arzamas. The boy attended school twice a week. Three months later, the sduty finished (classmates took 13-year-old Perov with them to the name day of one charming girl, after which a cabman brought a completely drunk teenager to his home and his mother said: "No!"). After the baron lost his place of manager (well, Credener could not restrain himself from barbs), the family moved to Arzamas again and settled in an apartment just opposite Stupin's school. This time, the mother did not let her son out of sight, and the study resumed.
Youth

In 1853, 20-year-old Perov entered the Moscow School of Painting and Sculpture. He begins his studies under the guidance of an experienced teacher Vasiliev, who quickly discerned a remarkable talent in a new student and helped him in every way. During his studies, Perov received a small silver medal for a modest sketch. Then there will be many - medals. But this was the first one and the artist always remembered it with special warmth. The last student's work was the painting "The First Rank", which brought the young artist a small gold medal. 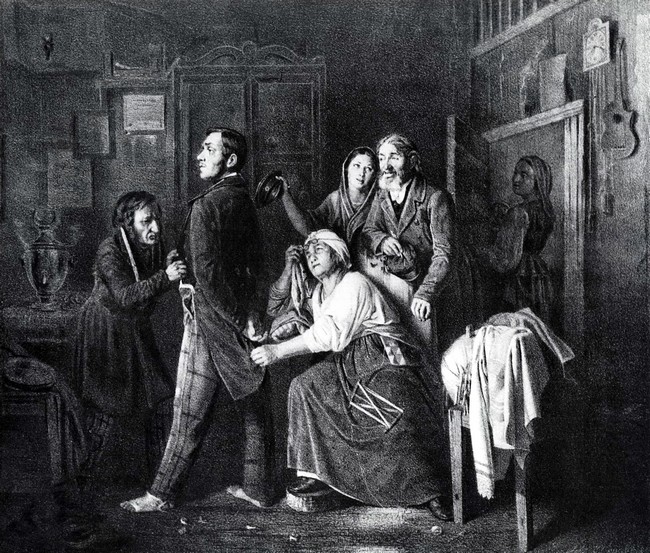 Upon graduation from college, Perov greatly excites society with his works: "Rural procession at Easter", "Sermon in the village", "Tea drinking in Mytishchi" - each work is a denunciation, each is like a shot at hypocrisy, bigotry, cowardice. The clouds begin to gather over Perov's head, the Holy Synod getting more and more annoyed. Only a big gold medal of the academy, receiving a scholarship and leaving for Europe calmed the passions. Youth is over. It is now Maturity.

Perov was bored abroad, despite several wonderful works brought from there. He even asks the Academy for permission to return early. He needed Russia for inspiration, for the embodiment of ideas, for life.

At home, the artist works very fruitfully. Soon critics and the progressive public started talking about the new talent. Each picture evokes a storm of delight among writers and young people, as well as a storm of indignation among conservatives. The plots of the paintings "Troika", "Village funeral", "The Drowned Woman", "The Last Tavern at the Outpost" denounce, cry, call. Each of his works reads the attitude of the author himself to what is happening, his civic position and pain.

Separately, we should say something about the galaxy of brilliant portraits painted by artists during their heyday. Dostoevsky, Rubinstein, Ostrovsky, Maikov, Dal - Perov left to descendants deep psychological portraits of the most talented people of his era. Those that Russia is proud of.

Perov is not only a great artist, but also an equally great teacher. Under his leadership, at the Moscow School of Painting and Sculpture, more than a dozen artists who are the pride of Russian art, grew up.

In incomplete half a century the Lord released Perov to earthly life. Consumption, an incurable disease at that time, interrupted the creative path of the great master. A small hospital in the village of Kuzminki near Moscow became the painter's place of last refuge. His ashes now rest in the cemetery of the Donskoy Monastery.
Like 0
Dislike 0
Comments (0)
Other
Boris Kustodiev Artist - Biography and Paintings